Thank you for your patience while we retrieve your images.

The SC State House at night. Photographed from the roof of the Gressette Building - the offices of the State Senate.

The South Carolina State House was described by architect Charles C. Wilson of Columbia as “one of the most notable buildings of the world.” Wilson was the last architect to work on the State House before its completion, but it was the lifework of Major John R. Niernsee, principal architect and designer of the stately building 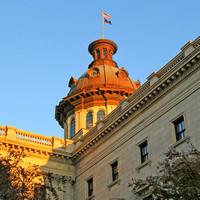